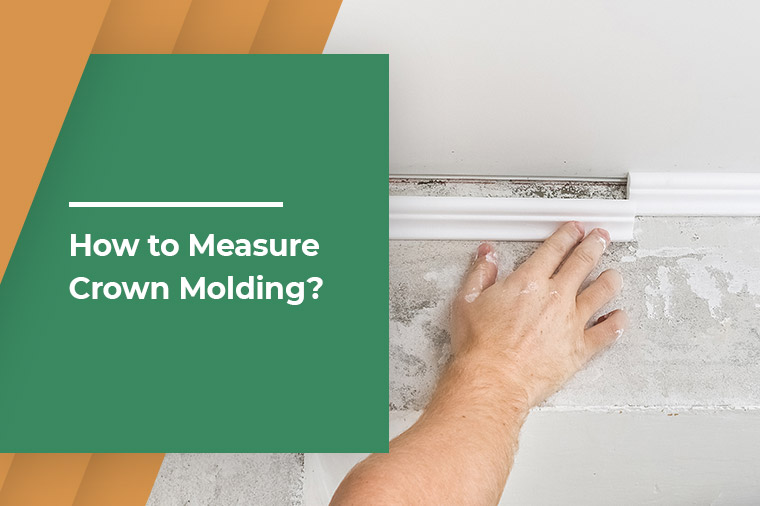 A crown molding is placed in a room to improve its appearance with an overall polished look. Even though the installation of crown molding is very simple, yet, obtaining the perfect angle cuts required for the corner portions calls for attention.

The process can even intimidate and put you in confusion at the beginning. This guide pinpoints the best practices generally followed to measure, cut, and install crown molding.

How to measure crown molding?

When a room is fitted with crown molding, a substantial boost in the character and depth of the room is brought about. Besides, crown molding helps amplify your unique style and prerequisites.

Since crown molding is a decorative elaboration, it becomes quite problematic and useless to work with commonly used materials in the course of the installation process. The technique calls for precise measurements and neat cutting for creating a smooth, unbroken connection among various segments.

In case, you’re contemplating working on one such project, here are a few tips to help you manage to measure and cut moldings.

While working with traditional building materials, solid woods, and plaster, the following key items of equipment will guide you on how to measure crown molding.

In general, crown molding comprises two-angled edges. Also, because of the requirement of its distinctive alignment, it needs to be leaned against both the walls and the ceiling. Of course, you can employ the miter saw for cutting it to the proper size. However, the process can be very exhausting, in particular, at times when the alignment between adjacent walls isn’t perfectly 90 degrees.

To make things happen more effortlessly follow the steps below.

See to it the 2 pieces of scrap wood have the same width. The first piece is to be placed on the wall in proximity to the ceiling. Next, the second piece is to be laid above the first keeping an inch of overlap in between.

It’s essential to position the second scrap wood near an outside corner facing the room’s interior. On the other hand, in the case of an inside corner looking away from the interior of the room, the second scrap board is to be laid atop the first. Finally, both the boards need to be pushed into the corner.

This will be followed by a step where you draw a diagonal from one corner to the other with the help of the combination square. This diagonal is a representation of the actual angular bisection between the two walls.

Once again, use the miter saw for cutting along the line of bisection. Next, you need to figure out what length of crown molding is needed. This can be achieved by running the tape measure from one corner to the other.

Keep in mind, while the inside corner indicates the long point of the cut made by the miter saw the outside corners indicate just the opposite. Make sure you get these points marked with a pencil.

This can be done by placing the crown molding on the miter saw in an upended position. Ensure the bed acts like the ceiling and the fence of the saw acts like the wall. Next, with the help of clamps, fix the segment in position, make the cut, and have the process repeated with other segments.

Do this in continuity until you get exactly what you need. For specific types of crown molding, several different saws such as handsaw, jigsaw, etc. also work perfectly.

How to cut crown molding?

There are four ways by which you can effectively cut a crown molding. These include the following:

To install crown molding, first, you need to apply beads of the best quality construction adhesive. The application should be done along the whole top as well as bottom surfaces that come in contact with the ceiling and walls. Make certain the adhesive is likewise applied on all joints. Press the molding in place by starting from one corner.

Subsequently, position the other corner by swinging it through. In this way, the molding looks slightly bowed in the middle. Once both the corners are secured, but the remaining part of the molding in place by pressing and fastening it with corrosion-free, 16 inches nails along the molding’s top and bottom edges.

This method of installation is cleaner because of the application of the adhesive only on the crown molding. Besides, by adopting this method, you can prevent the adhesive to tarnish other areas of the ceiling and walls.

To remove traces of adhesive, if at all any, from unwanted places, immediately, clean them using a wet rag. Also, if you come across any adhesive leakage from any part in the course of the drying process, gently scrape the dried material off by using a utility knife.

In case you want to ease the pressure off by smoothly putting all these steps together without letting go of the beauty of crown moldings, Florida Lumbar comes with options to effortlessly measure, cut, and install stunningly crafted, durable, and easy-to-handle crown moldings.