15 Door Hardware Parts to Know Before Upgrading It 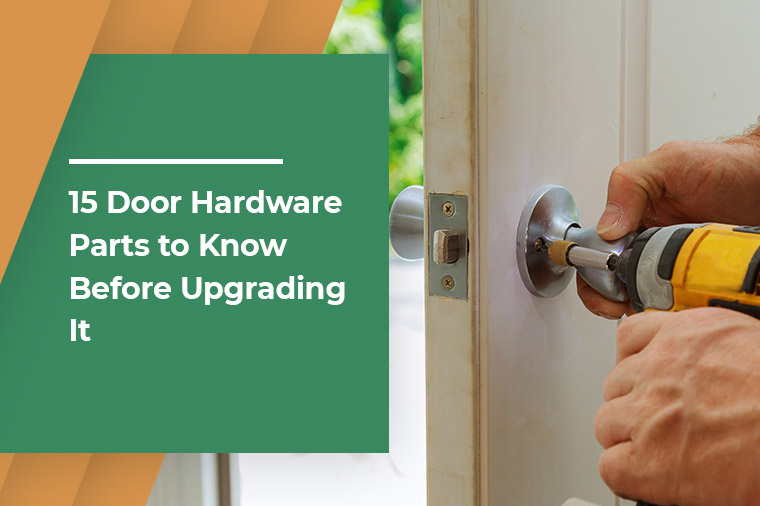 It is a cylinder that is mostly driven through the door edges and it is also known as the tubular latch mechanisms. The working of the latch mechanism is very simple. There is a spring with a latch and it retracts for the door to open with the release of the doorknob or else the lever will keep the door closed.

If you require the same latch system for a door that is outside, then the lock comes with a mortise plate and it would also require some chiselling on the edge. The Mortis plates are not a few door accessories that look nice but they also make the door secure.

The ball catches are the door accessories that are often used in the closet doors. But there are also many other applications. Their work is very simple. It has a hole drilled on the top of the door and there is a spring ball installed which is a little protruded towards the top of the door.

There is a strike plate installed which resembles much like a strike plate used regularly. There is also a small indentation which can close the door. It is a simple and easy mechanism that is widely used in the doors. If you want an easy replacement of your door, then you can use this.

The borehole is one of the most basic door accessories. It is a hole drilled in any part of the door where the lock has to be set. The hole holds a knob-set.

A deadbolt is one of the most popular locking mechanisms which is mounted similar to that of a doorknob. Most of the doors towards the exterior of the space have a doorknob for locking.

There is also a deadbolt. A deadbolt is a hole bore directly above the hole of the doorknob. When we turn a liver there is a steel cylinder that is inserted inside the door jamb to keep it secured and locked.

Some locks might have single or double-solid cylinders. The single cylinders are always available on the exterior doors and there is a lever to turn the door lock. On the other hand, the double cylinder deadbolt lock has a key to lock or unlock it.

The door hinges are vital door hardware. These are made up of two plates that are attached with the help of some removable pins. They hold the door securely and allow it to swing. Hence, the swing gives it the ease to be opened and closed. This is major door hardware that can be found in all kinds of doors.

Doorstops are commonly seen towards the bottom of the door. These can be defined as a piece of knobs that vertically run through the jamb. The door stops work to stop the door with the help of the jamb. It also protects your door from being opened oppositely. The little distance between the door and the jambs can easily be hidden with the help of door stops.

As the name suggests, the door viewer is a piece of door hardware with curved lenses on the inside. This makes the view of the outside magnified and is used to see who outside your door.

These dummy knobs are sometimes called the dummy trim. These are used on the young doors or basically, the doors that are not bored of holding knob sets. These knobs are sold in the market individually and they have one knob that can help them to be mounted with the help of the screws.

The flush bolts are often seen being used on the French doors. They are mostly seen to be minted on the edge towards the inside of the door. If one pushes the flush bolt up, the bolt can be inserted into the jamb and that alone helps to keep the door closed.

The flush bolts are traced in many French door applications mostly in the top or towards the bottom of the door. The one side of the French door remains closed when you use this, but the other side is not. The fixed door can also be easily opened as per the requirement.

A keyway is known to be one of the most vital door hardware. It is a cylindrical doorknob. When a key is inserted in the lock to the keyway, the lock gets closed. And similarly, the vice-versa happens. The keyways can also be changed if there are any security reasons. You must also know that there are different brands and while making a key, the keyway can also be alike to any other locks.

A keyway is the actual key cylinder that is inserted into the doorknob. When a doorknob is unlocked, the key is inserted into the keyway and the lock mechanism is unlocked as the key turns. Keyways can be removed and changed for security reasons or to key several locks alike. Keep in mind that not all keyways are made alike so when you order different brands, there is a good chance they can’t be keyed alike.

A lever or a lever handle is door hardware that has similar functions to that of the doorknobs. But the appearance of it is different. A lever comes with a fancy look. It is a sleek design with a slim look. Your lever handle should always face the right side after you install it.

A non-rising pin can be similar to that of the hinge pin. This is mostly used in places where there is a high-security requirement. These pins cannot be removed and therefore, they are most needed outside the buildings. This is reliable door hardware that is majorly used for places where the security concern is too high.

The doorknobs are to be attached to the door and the part that attaches it is known as Rosette.

A strike plate is an important part which is a metal piece and it is always attached to the door jamb. The latch mechanism strikes the plate and holds the door while it is closed. The finish of the strike plates is similar to that of the doorknob plates.

These are the little important door hardware that is often used in the doors. Check them out above and know the function of all the parts. When you know the door parts, you can effectively decide on what parts to be brought while the reinstallation of the doors.