Difference between Quikrete and Traditional Concrete 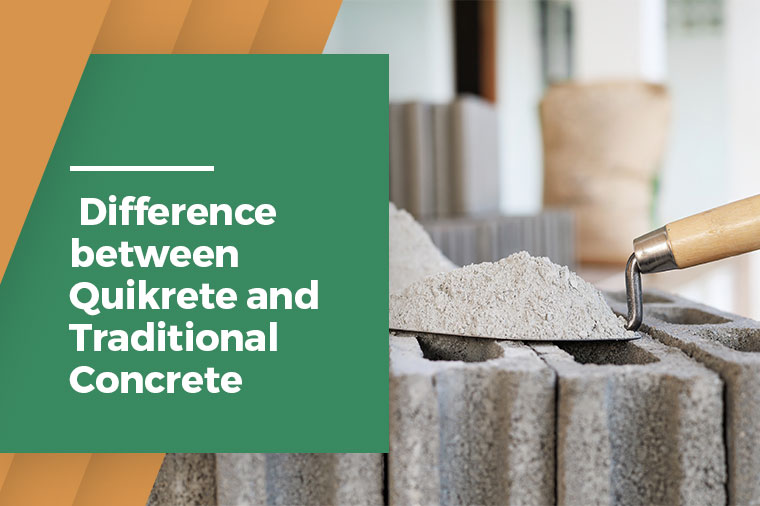 The world is always looking for new and improved materials to meet the needs of society. Concrete has been a material that is relied upon for many centuries when building homes, businesses, and roads. However, as the world grows older, concrete has begun to lose its technological edge. In more modern times concrete has been replaced with more advanced structural materials.

One such example of a superior technological edge is the ability of some concrete mixes to be installed and set up within a matter of hours. This can be seen in the Quikrete system which has many advantages over traditional concrete.

Concrete has been used for centuries to create structures that have withstood the test of time. For example, many Roman structures, including roads, have withstood natural elements for centuries. Those same roads are still driven on today by vehicles that use more advanced technology than the Romans had access to. Advances in the field of concrete have ensured that it will be a material used for many more years to come in our society.

Quikrete is a brand of fast-setting concrete. The Quikrete system is a mixture of cement, water, and aggregate that is installed and set up within hours. The main advantages of the Quikrete system are its strength and ability to set up very quickly.

Difference between Quikrete vs Traditional Concrete:

Although Quikrete is more expensive than traditional concrete, it is much cheaper to install in comparison. In fact, the average installation cost for a Quikrete installation is around $1,000 whereas the same job for Traditional Concrete can cost over $2,000. In addition to being cheaper to install the Quikrete system is also significantly stronger than traditional concrete. Other strength benefits of the Quikrete system are that it sets up much faster (a few hours) and has minimal dust.

Quikrete has been engineered with a virtually non-existent coefficient of expansion (coefficient of expansion refers to how expanding materials change dimension). As a result, the Quikrete mix can be installed in a very short period of time to make it more attractive to installers and construction companies. Quikrete can be placed in place quickly and still maintain the structural integrity of the job.  Traditional concrete requires many, many hours before it is fully set up. The additional time spent by the concrete to become properly set up allows for water to seep into the mix, which weakens it over time and eventually leads to structural failure. Since Quikrete needs less time to become fully set up, it has stronger strength than traditional concrete.

Quikrete has been engineered to be a stronger product with a higher compressive strength (ability to bear loads) and greater tensile strength (resistance to being pulled apart). Therefore, Quikrete can be used to build larger structures than traditional concrete.

Quikrete can also be installed in damp conditions whereas traditional concrete cannot. The ability of the Quikrete mix to set up in wet conditions makes it perfect for installation during rainy seasons when many construction projects are otherwise unable to continue due to weather conditions. The ability of Quikrete to set up when wet gives it another edge over traditional concrete because it has a very minimal amount of dust if any at all, which reduces the exposure of workers to unsafe work environments.

DRYWALL VS PLASTER - WHICH ONE TO CHOOSE?

Since the Quikrete system is a mixture of cement, water and aggregate it is much easier to install in the field than traditional concrete. Simply add water to the bag, mix it up and you are good to go. Traditional concrete takes a very long time to install because there is more work involved in mixing up all of the components in order to get it ready for installation.